Telephone communication is one of the several things that are extremely necessary in order to get an office running. Most of the communication that is being done within an office space is done with the office telephones and therefore choosing the right option is highly essential.

Technology has always driven our lives towards more ease and comfort, similar is the situation with technology being used in landline telephone communication. We have 3 phone systems that can be used in an office space, namely, Virtual Phones, Traditional Landline Systems and VoIP also known as Software or Voice over IP phones.

As the name suggests Virtual phones are inexistent phones, it is simply a number assigned to a user that routes the calls to the person’s cell phone or mobile device. This can be a huge help when it comes to a company whose employees are situated in remote locations or they tend to work on night shifts. Companies that have a global presence can take advantage of virtual phones by simply forwarding the calls to the employee’s mobile phone device.

The downside however is that these phones are unable to make any calls and the calls are charged from the mobile network. 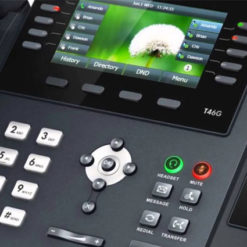 The downside of these phones is the fact that they provide minimum functionalities and features keeping in mind the modern use of communication. Another problem with the traditional phone is that several system providers are moving away from it which is why companies require in-house technicians that add up to the overall cost.

Large corporations that can afford in-house technicians can get the most out of these systems, that is, if they are ready to compromise on modern functionalities. Also, the companies that lack high-speed internet prefer the use of these systems.

VoIP phones or Voice over IP also known as Software phones are connected to the internet connection that is being used within an organization. These systems can be easily setup and are cheaper as compared to traditional phones. They provide all the functionalities and features that are the need for the modern world, especially the advanced software known as 3CX Phone System.

These phones can be utilized and configured in two ways. The first one is known as On-Premises VoIP Systems that is buying all the equipment one time and then connecting it to the internet connection. The on-premises system is suitable for companies that are concerned about privacy and secure communication. The second kind is Cloud-Based VoIP Systems that is being serviced by the provider. The cloud-based systems are ideal for startups and small businesses.